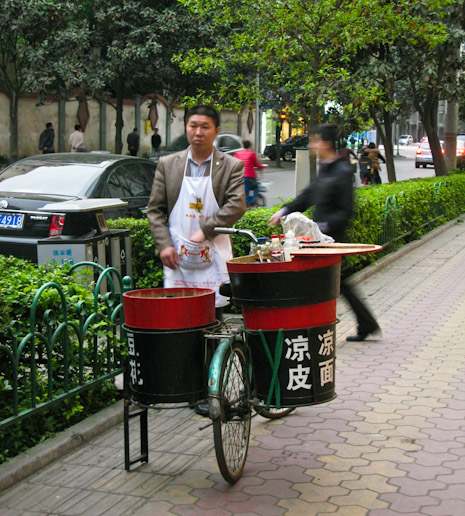 UNESCO named Chengdu the City of Gastronomy because there are more eating opportunities here than anywhere in Asia. Wherever you look, something is cooking. Gazillions of 'normal' restaurants, multistory labyrinths devoted to food courts, moveable snack kitchens on pushcarts and tricycles, and an endless array of takeaway 'things on a stick', from pineapples to roasted quails. Every doorman cooks sausages and steams buns, every bench doubles as a mini-hotpot stop and every newspaper kiosk has a rotisserie in front. As we keep finding out, most Chengdu eats are tasty and cheap.

Since coming here in the last days of March we have not had the same dish twice. To begin narrowing it down, here are some of the noodles that we've eaten and liked: 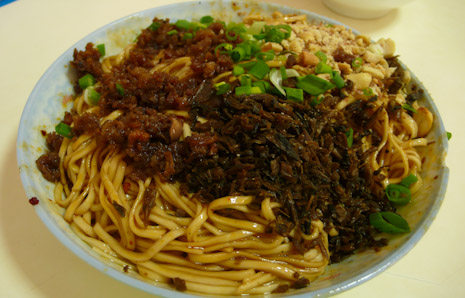 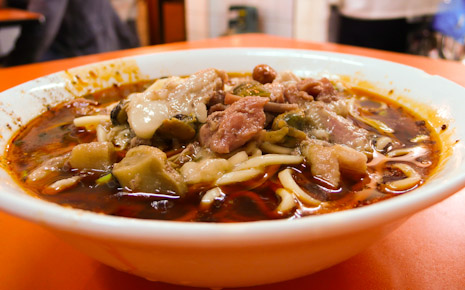 Strange-flavored thick wheat noodle at Guaiweimian 怪味面. Handmade noodles are drowned in a mix of chili and sesame oils, flavored with sugar, vinegar and soy sauce, topped with pork cubes. The flavor is intriguing but the dish is especially greasy. 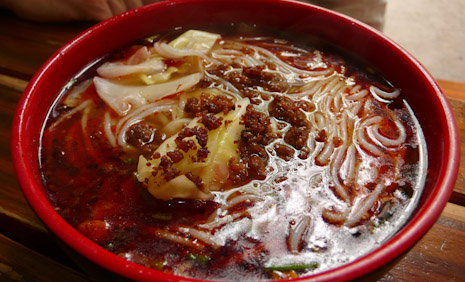 Thin rice noodle at Laoma Chaoshou 老妈麻抄手. This shop is a chain famous for its insanely numbing (麻) wonton dumplings. Thin rice noodle mixian 米线 is number two on the menu and is basically the same dish with a different main ingredient. The noodles are floating in chili-infused broth with lots of pepper flakes, pieces of Chinese cabbage and a sprinkling of deep-fried ground meat. Still, the dumplings are better. 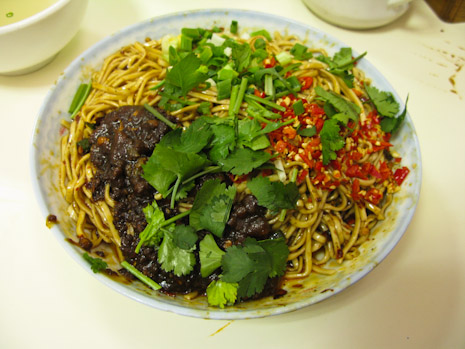 Fresh pepper and beef egg noodles at Yibin Ranmian 宜宾燃面. Store-bought egg noodles are served with sauteed ground beef, hot red peppers and cilantro. The flavor is balanced, not boring, but the hotness builds up as you eat! 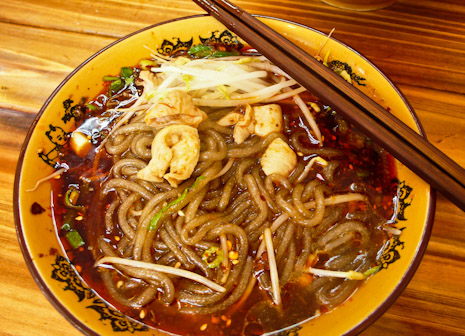 Fatty intestine bean noodle at Feichangmian 肥肠面. Elastic noodles are mixed with fresh bean sprouts and diced pig's intestine; served submerged in oily broth with the sediment of chili flakes and sesame seeds. I tried a couple bites of the intestine and ignored it until the end of the bowl. 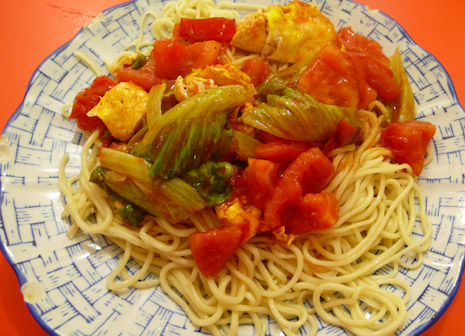 Pulled noodles 蛋炒拉面 at a neighborhood halal canteen. Topped with fried egg, lettuce and juicy tomato, this is my new favorite breakfast. The noodles were made from scratch from a large piece of fresh dough – the advantage of ordering it in the morning. 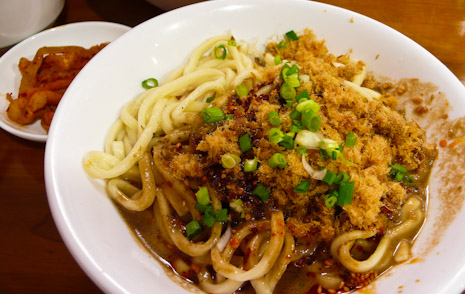 Thick wheat noodles called 'bewitching noodles' at the eponymous canteen Gouhunmian 勾魂面. The salty and rich sauce resembles 'strange flavor' and contains meat floss (rousong 肉松). According to a legend, 450 years ago, some clumsy Zigong meat dealer dropped a load of pork into a salt pit (which were many in this salt-mining county). Unwilling to let the meat go to waste, the pit owner extracted the meat, cooked it for a very long time (until it fell into fibers) and used for noodle toppings. A nice 'salty' touch: the noodles were served with awesome crunchy pickles on the side.
Collapse