I don't much like hotpot. Huge cauldrons of broth, batteries of raw ingredients, endless work on dipping and extracting... It calls for a big company; hotpot for two is a bit pathetic. I like my food roasted, grilled, deep-fried, dry-fried, quick-fried, braised, smoked, slathered in spices... more than I like it boiled and stewed.

(I also secretly think I only want my hotpot in Chongqing; nothing else can hit the mark.)

That said, there's hotpot and there's hotpot. Well-spiced and fragrant broth plus smart, flavorful dip make a huge difference. So while avoiding 'general purpose' hotpots in the city brimming with them, we landed with several anti-hotpots. Ling Ling 零零冷锅串串 is a wildly popular chain [link]. The way 'chuan chuan xiang' works is you load your tray with skewere raw ingredients, give it to the kitchen staff, they cook it and bring to your table in a cauldron of oil. This is also called 'cold pot' 冷锅 because there are no individual burners at the table. After the meal, waiters (dressed in T-shirts with the portrait of Lei Feng) extract the bins with empty skewers from under the table, count the sticks and tell you the total. It's cheap: Y0.15 a skewer. 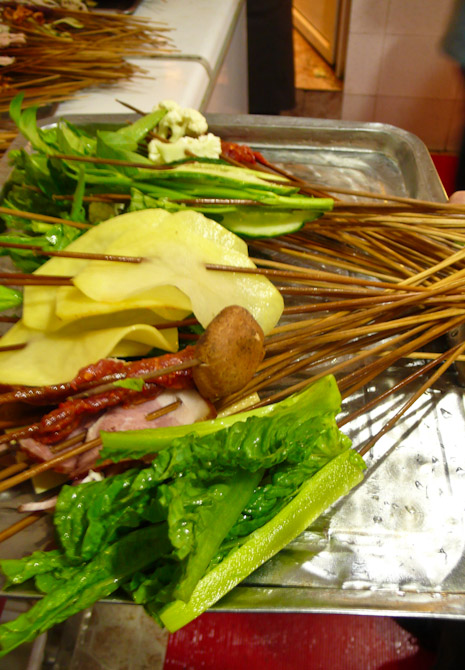 It was quite an acrobatic act, to maneuvre in the 'supplies' corner, identify and extract the delicacies from the refrigerators and balance the tray as we loaded it. 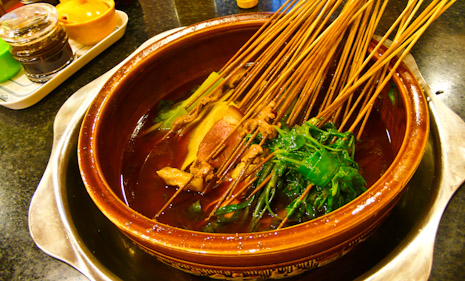 We got (what looked like) beef, some dumplings, bacon, mushrooms, leafy greens, slices of potato and cucumber and florets of cauliflower. The bits strung on each skewer were often minuscule but the freshness of the components was exemplary. 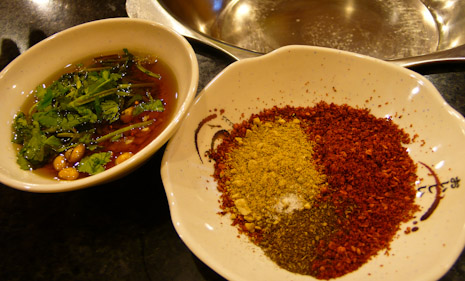 Since the hotpot base is just hot oil and not particularly 'mala', using the dips to flavor the morsels is 80% of the pleasure: we grabbed both the 'dry dish' (chili flakes, crushed peanuts, ground Sichuan peppercorns, salt) and the 'oily dish' (garlic, cilantro, sesame oil, salt, sediment of chili flakes). 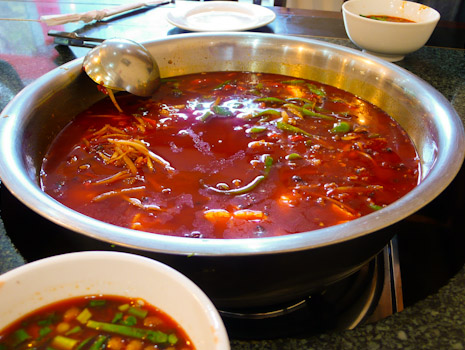 Zigong is a 'dialect' of Sichuan cooking that we've been calling favorite. When we went to a reputable chain restaurant, Zigong Haochike 自贡好吃客 [link], we ended up in a two-stage cold-to-hot-pot extravaganza. First stage: you order your main dish in a giant soup and eat the main ingredients, dipping them in your personal sauce bowl. Second stage: waiters turn on the burner under the pot, bring the soup to a boil, deliver more ingredients and you cook them. 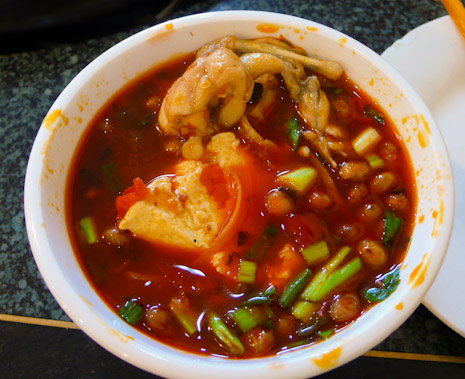 Our main dish was called Leaping Frog 跳水蛙, sold by the frog weight. A pound of frogs evidently included everything save the webbed feet, but it was divine. Bony and twisted bits of frog contrasted with fluffy tofu and went perfectly with crunchy fried soy beans and onion bits in the dipping bowl. The dinner was so spicy I forgot what we ordered for the hotpot stage other than potatoes and lettuce. 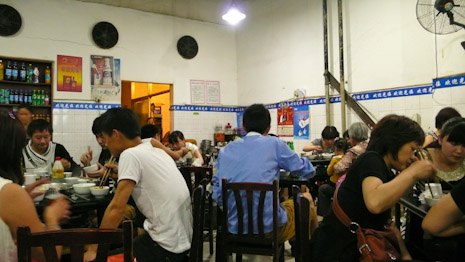 Luzhou is close to Chongqing (land of hotpot) and Yibin (land of pickles), so it's only natural that its culinary export to Chengdu is a briny hotpot loaded with pickled greens and porous tofu (douhua). A rowdy canteen called 泸州酸菜豆花火锅 is in the middle of the student neighborhood at Hongwasi Jie [link]. 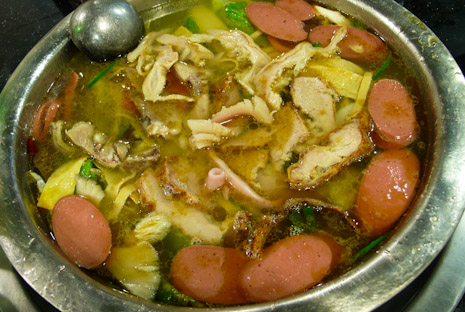 On top of slightly odorous, spongy tofu and threads of pickled greens, our pot base contained 'three treasures' (I deciphered them as 'bowels, bladders and brains' although they were more like tongue, stomach and some meat). 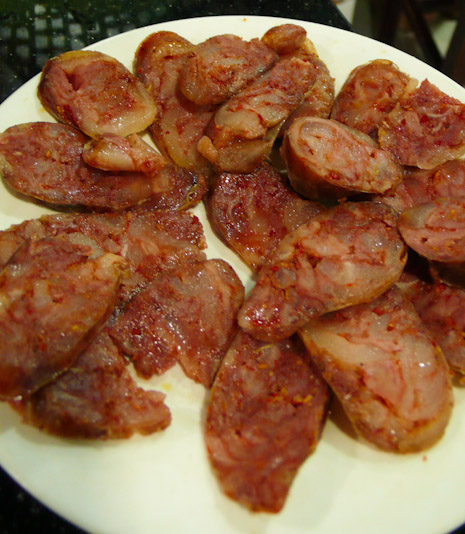 To offset the synthetic pink sausage we ordered 'Sichuan sausage' 川味香肠 and were very pleased with it. 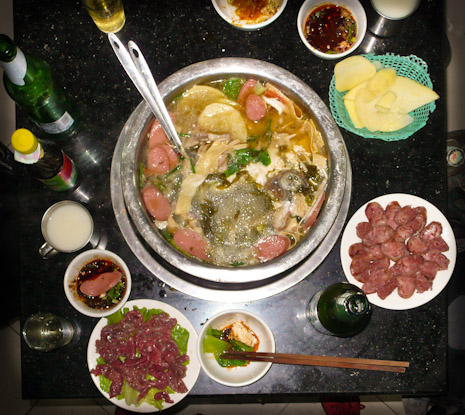 We also ordered plates of beef, spinach, potatoes and winter melon. And each diner got a free aluminum mug with hot soy milk. 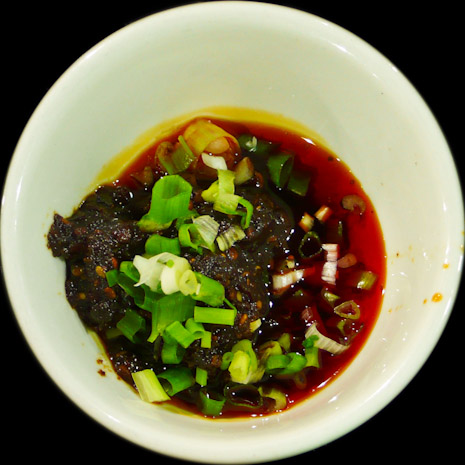 The cornucopia of items in the bubbling pot already made everything flavorful, but the salty and hot dipping dish with mashed black beans, onion and chili oil was just the most glorious touch.
Collapse